Ikoyi in Lagos is bordered by the Lagos Lagoon, the Cowrie creek and the Macgregor canal that was dug by the colonial British government. The fabulous Banana Island, standing to the West, the handsome Parkview estate to the south and the serene Dolphin Estate pushed to the north are newer suburbs of the area. Ikoyi belongs in same administrative entity as the equally expensive Victoria Island, which borders it from the Atlantic Ocean. It is the seat of many new generation banks and business enterprises. Many exquisite hotels such as the Federal Palace Hotel and the Southersun Ikoyi Hotel are domiciled in this area. There are also some government buildings such as the Doddan Barracks, which used to serve as residents of Nigeria military Heads of State.

Before Nigeria attained independence Ikoyi was squarely a European quarter and as political power eased into native hands, became the Government Reservation where the white men and Africans high up in the civil service lived. Membership of Ikoyi Club that was founded in 1938 was constitutionally for whites only until the 1950s. Ikoyi is today the site of several luxury apartments and classy office development. There are also a few upscale international schools, a Golf ground, Polo ground and decent shopping centers.

Ikoyi is part of the Eti Osa Local Government Area that was first created as an administrative unit in 1980. Eti Osa also have some 40 rural settlements. The 2006 Census puts the population of this area at 983,513 people.

Ikoyi’s origination was concurrent with the traditional founding of Lagos by Ogunfumnire also called Olofin. Adeyemi Aole Onikoyi who came from Igbeti Ikoyi-Ile was one of the hunters who advanced towards the ocean in search of adventure and opportunities. When the two friends, Onikoyi and Olofin reached Isheri, it was decided that Onikoyi should move forward towards the Ocean to forestall any possible rift. The place that he founded he named after Ikoyi-Ile in Igbeti. Eko Hotels is one of the most prestigious hotels in Lagos. Accommodation services are offered on four tiers: Eko Gardens, Eko Suites, Eko Hotel and Eko Signature. Hotel occupies a brilliant site on the Lagos Island and a walking distance from the Bar Beach. It is normally frequented by diplomats, business personalities and tourists because of its unique restaurant and lodging facilities.

Four Points is an offshoot of the Sheraton Hotel Brand, which is owned by the Starwood Hotel Group. Its premises in Lagos consist of 234 guestrooms categorized into four variants ranging from the Traditional rooms to the executive suites. This four-star hotel plays host to business people and pleasure seekers alike. Basic amenities include Restaurant and bars, spa and fitness center, and indoor pool.

La Magna Beach Villa is located along the beach waterfront on an island in Ilashe. This beach resort sits on over 15,000 square meters and its just a 15-minute boat ride from Ikoyi and Victoria Island. Suitably for tourists and pleasure seekers, this beach resort offers villas that come with its own pool, rooftop Jacuzzi, massage room, furnished kitchen and a private lounge.

Lacour Hotel located at Glover road Ikoyi is a 24-room boutique hotel offering lodging services to corporate and individual guests. Rooms vary from standard to deluxe. This hotel features amenities such as a bar, swimming pool, gym, meeting and conference rooms, and a spa. The hotel also has another premises located at cooper road. This comes with 35 rooms and also features a gym, restaurant and conferencing facilities.

The Avenue Suites is one of the leading hotels in Lagos with lodging facilities, restaurant, meeting and conferencing facilities and a gym. Rooms are distinguished into six categories and booking is done based on a specific category.

Lagos Oriental Hotel, with 64 guestrooms within the confines of the complex which is located along the expressway, offers accommodation to corporate guests alongside individual guests. The hotel features a Chinese and Japanese restaurant, bar, grand ballroom. Rooms range from classic superior to the Presidential suite.

Pearl Court Hotel is situated in Ikoyi, Lagos. The hotel comes with 36 rooms along with a bar; concierge services a conference center and a restaurant. This 4-star hotel offers lodging services to corporate guests and tourists likewise. Rooms are categorized into classic rooms and premium double rooms. It is reckoned to be among the best within the Ikoyi axis.

Radisson Blu Anchorage Hotel Lagos is an offshoot of the Radisson Blu Hotels & Resorts, which is part of the Rezidor Hotel Group. The hotel consists of 170 rooms, fitness and wellness center and a restaurant. Rooms vary from standard to suites. It is reckoned to be among the best in the area.

Southern Sun Hotel Ikoyi is an offshoot of Tsogo Sun Hotels, a leading hotel chain in South Africa. Its premises in Lagos offer a 195-room lodging service to corporate and individual guests. This 4-star hotel comes with features a mini bar, business center, restaurant and a gym. Rooms range from executive to suite.

The Wheatbaker Hotel in Lagos is a 65-room hotel owned by Legacy Hotels and Resorts, and located in the hub of the Ikoyi district. This 4-star hotel offers accommodation to business and individual guests. The hotel features amenities such as a baby-sitting service, laundry, restaurant and a business center.

Victoria Crown Plaza is located in the hub of Lagos Island. This hotel offers lodging services to tourists, individual and corporate guests. It comes with 49 rooms, restaurant, bars and a banqueting facility. Rooms vary from the classic king room to the presidential suite. 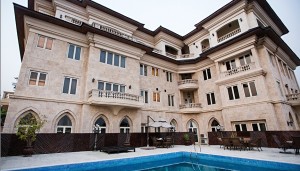 West Foster Harbour is located along the waterfront in Ikoyi. This hotel offers lodging services to corporate and individual guests. It features a studio apartment, 3 apartments and a penthouse suite. Amenities include gym, restaurant, swimming pool and a meeting room. It is adjudged to be among the best in the region.