Sustainable energy is a major component in the drive to boost Nigeria’s electricity supply. Sustainable energy which could be obtained through water, sun, wind and bio mass are the best any nation can rely on. Renewable energy refers to energy derived from a source, which can be replenished within a relatively short time or a source that has the ability to continue providing energy with no long-term adverse effect to the environment. Nations worldwide are pushing for development, which is driven by energy sources, technologies and best practices that are sustainable[1]. For economic infrastructural development, regular supply of electricity were among the most recommended in the New Partnership for African Development (NEPAD) initiative under the auspices of the African Union (AU). This set of policy actions is recognized as important in pulling individual countries out of its poverty trap[2].

Publicly available to the over 200 million Nigerian population is 7GW out of which only 4-5GW is traded on a daily basis. 81.8 percent of this power is from gas, while the remaining 18.2 is from hydroelectric sources.  Privately, nine times more (65GW) is generated. On whether it would ever be possible for the country to enjoy uninterrupted power supply as obtains in other lands, President Obasanjo explained that such is only attainable when a country consumes only about 75 percent of what it generates. Unfortunately, Nigeria generates just a fraction of what it needs.

The Zungeru project was conceived in the early 1980s and has been on the drawing board for 30 years since the first feasibility studies by Messrs Chas T. Main International of the United States (US). Successive governments tried fruitlessly to bring the project to a reality, due to the enormous technical complexities and high financial implications involved, the project could not proceed as scheduled. Consequently, the approval and the award of the contract for the real Engineering Procurement and Construction (EPC) was granted Messrs Synohydro Corporation/China National Electrical Engineering Corporation (CNEEC) consortium at N162.9 billion, with a completion period of four years[3].

The Kainji Dam in Nigeria was affected by the drought of the early 1970, with obvious consequences for private and industrial electricity supplies[4]. Hydroelectric sources of power account for 18.1 percent of Nigeria’s central electricity supply.

National Agency for Science and Engineering infrastructure, NASENI, manufactured Solar Panel modules in Karshi-Abuja, resulting in Nigeria becoming one of the two African countries that manufacture solar panels by 2011. An attempt to boost the power situation in Nigeria also saw NASENI manufacturing small hydro-power, SHR turbines and installing same in each of the six geo-politicai zones; the design and production of pole-mounted transformers, and the production of wind turbine blade[5].

Under President Jonathan, a 10-year Gas Supply and Aggregation Agreement (GSAA) was executed, which is based on the industry template developed by the Nigerian National Petroleum Corporation. Chevron will provide gas to Egbin power plant for power generation. This will be the first time that Egbin power plant will be able to procure gas under long-term arrangements[6]. In 2020, the Saharan Group, company running the Egbin station announced a steady generation of 750 MW, a significant improvement from the 400MW that used to be the average for same sation before privatization. 81.9 percent of electricity generated for distribution by DISCOS is through gas.

In the Transformation Agenda of his government, President Yar’Adua mandated the Mines and Steel Development Ministry to ensure coal contributes 30 percent of power generation by year 2020. The vision was for the nation to generate 35,000 Megawatts in 7 years time, which meant power from coal-fired plants is expected to be 10,500 MW. In this line, the agency carried out exploration of coal in Lafia/Obi, Gombe, Bauchi, Kogi, Amasiado, Afuze in attempt to play its role in this quest of the government[7].

NEPA neither generated nor distributed enough power for most of its existence, for a dozen of reasons, including for instance, a Turn Around Maintenance, TAM, at one time, at both its Egbin and Kainji thermal stations. In order to continue to provide services for its consumers, NEPA often resorted to rationing supplies in major cities[8].

As consumers get desperate over incessant power failures and costly current fluctuations, NEPA, in total surrender, once laid the blame squarely on vandals, thieves and debtors. The contention at the beginning of the 1990s is that since NEPA has learnt to charge higher fees, then it should also learn to improve on its services.  NEPA enjoyed immunity from suits for damages Section 12 (2) of the NEPA Act was unambigious on that. It stated that: ‘The authority shall in no case be under any obligation to pay damages or compensations for loss, damage, or in- convenience caused to any consumer through any suspension, failure, discontinuance of whole or partial interruption of the supply of electricity howsoever caused’. Legal experts were unanimous in their view that it was time the law is repealed. They argued that NEPA needed that protection as a public utility, but now that it had gone commercial, it should ceased to enjoy that immunity[9]. According to one-time Minister of Petroleum and Energy, and Mines, Power and Steel, Tom David-West, NEPA too, was corrupt[10].

NEPA was rebranded as Power Holding Company of Nigeria when the Power Sector Reform Act was passed in 2005. Soon, the Federal Government came up with the idea of privatising this corrupt and inept power monopoly. The official ideaology is that the units of the company could only be attractive to buyers if its tariff regime is raised. President Obasanjo’s reforms in power sector were designed to attract private sector investment and ensure effectiveness. Omotosho Power Plant, among a dozen others, was at its inauguration projected to generate 335 kilowatts         of electricity in Ondo State[11]. Between 1999 and 2007, total watts generated recorded a marginal increase from 1,500 megawatts to 4000. Four generating power stations were also revived to bring the nation’s asset to five[12]. At inception in 1999, Obasanjo promised Nigerians steady power supply. Minister of Power and Steel, Bola Ige, assured Nigerians that the nation would have steady power supply by 2001. But that assurance died before Ige. The promise of increasing the nation’s output from 1,700MW in 1999 to 10,000 MW by 2007 remained unfulfilled. Despite government investment of over N574 billion in the sector, power output continued to dip, a situation that killed many business ideas as it cost investors hefty sums to run generators.

President Yar’Adua promised to declare the power problem a national emergency within the first six months of his presidency. The goal, he said, was to generate 30,000 MW by the end of 2011[13]. He failed. Even after electricity company in Nigeria was privatized, the situation worsened, meters were not supplied after they have been paid for. The Federal Government under President Jonathan also invested  heavily to boost generation through the large, medium and small Hydro plants with the total capacity of over 4,234mw being: Zungeru – 700mw; Mambilla – 3050mw; Gurara second phase -360mw; Itsi- 40mw; Small Hydro plant – 84mw[14].

Nigerian Electricity Regulatory Commision (NERC), the entity that is responsible for designing the market and putting out the rules to make that market work, approved a review of the Multi Year Tariff Order (MYTO) effective January 1, 2015. Alive since 2008, the government is supposed, under MYTO, to subsidise the cost of electricity; but over a period of time, this subsidy would be gradually phased out while consumers would then be made to pay what should be decided as the appropriate price. It was also assumed that over the period that the subsidy would be eliminated, power supply would have been improved upon substantially, so that increased payment would go hand-in-hand with improved supply. 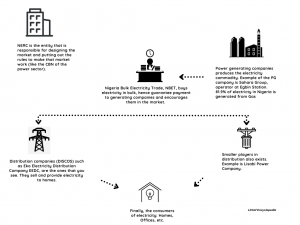 In a TedX talk, Eyo Ekpo, a lawyer and one-time team leader at Bereau of Public Enterprise, blamed the insolvency of the Nigerian power industry on non-cost-reflective tariff. Based on the trading of the electricity commodity, some 50 billion naira is estimated to be circulated in the sector monthly. Less than 30 percent of this money actually goes to where it should- generating company that produce electricity, transmission Company that picks it up wholesale and delivers it to the distribution companies, DISCOS. This causes imbalance in the energy value chain.

NERC, according to Eyo, abdicated its responsibilities; and others have taken it on its behalf. It failed to deal with market design for a relatively young market. The Federal Ministry of Power on the other hand is overbearing and it throws out policies which makes no sense to the sector. This gives a market that is dysfunctional. Hence, a DISCO that is not doing what it is supposed to do. Consumers, according to Eyo Ekpo are irrational, wanting power but not wanting to pay for it. Power theft, he mentions, causes unbalanced energy market.